Epidemiology is the study of the distribution of health problems and their determinants in human populations. In this context, one of its aims is to study the impact of behavioral, occupational and environmental factors on health. An epidemiological study aims to analyze the factors which influence the frequency or distribution of diseases and other health phenomena in the populations exposed to these factors. Its objective is to attempt to establish an association between exposure to certain substances and the occurrence of disease. There are two main types of epidemiology studies, experimental and non-experimental. The non-experimental studies are also called observational studies.

The figure below displays the number of influenza-like illness (ILI) cases reported during the 2006-07, 2007-08, 2008-2009 and 2009-2010 influenza seasons.  ILI is defined as fever > 100˚ F AND cough and/ or sore throat without another identified cause.  ILI can be caused by a variety of respiratory viruses, so data should always be interpreted in the context of laboratory data.  ILI cases are reported by physicians to local health departments.  Local health departments report the data weekly to the state. The Centers for Disease Control and Prevention compiles weekly data and reports the data by “MMWR week.” Usually, there are 52 MMWR weeks per year. Some years, there are 53 MMWR weeks. By following this link you can read something more about descriptive and analytic epidemiology. 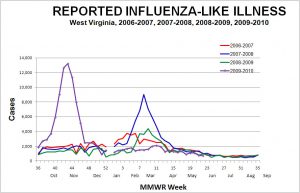 The Sentinel map shows West Virginia counties that have enrolled influenza sentinel providers for the 2009-10 season.

The figure below demonstrates the percent of visits for influenza-like illness (ILI) reported by West Virginia sentinel providers during the 2009-10 influenza season.  Sentinel providers are volunteer physicians who report cases of ILI as a proportion of total patients seen.  If the resulting percentage of visits due to ILI is higher than 2.4% then high rates of influenza transmission are likely.  Reports of ILI should always be viewed within the context of laboratory data and other indicators of influenza activity. 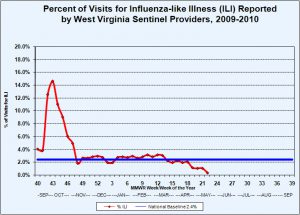 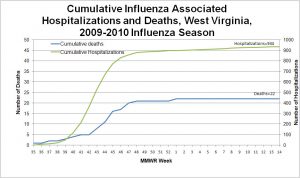